The ACLU of Massachusetts is proud to celebrate a number of historic state legislative victories this year! Chief among them is the first major overhaul of our public records law in more than 40 years. Increasing government transparency is essential to accountability on civil rights and civil liberties across the board, from smart justice to digital security, because information is power, including the power to effect change.

We built and led this campaign, and the photo above shows our executive director Carol Rose and I looking on in Gov. Baker's office as he signs the bill. We won historic reforms to make the right to know meaningfully enforceable for the first time ever. With the promise of attorney fees for successful plaintiffs, lower costs to obtain records and significantly increased accountability, freedom in information in the Commonwealth is finally going to be a whole lot freer!

We’re also tremendously proud to have participated in two huge victories for equality: protecting transgender people from discrimination, and advancing equal pay for equal work.
We’ve been on the barricades for trans rights for a decade. After passing a broad, but incomplete, gender identity nondiscrimination law in 2011, we’re proud to have helped Massachusetts finish the job! Now, in addition to protections in employment, housing, education, and credit, transgender people will finally have explicit legal backing against discrimination in public accommodations – all spaces open to the general public such as restaurants, retail shops, hotels, and public transportation. About time!

And as a proud member of the Equal Pay coalition, the ACLU mobilized our members and supporters to help close the gender pay gap. In 2016, for women working full-time in Massachusetts, the pay gap still means an average loss of $10,000 a year compared to male colleagues. But 70 years after Massachusetts became the first state to pass a law requiring that men and women be paid the same wage for comparable work, at long last we’re making that principle more enforceable with a statute that can be a model for the nation. It provides a much-needed definition of comparable work, encourages pay transparency and prohibits employers from making hiring decisions based on an applicant's salary history.

There is so much to celebrate. But there are real disappointments, too.

This legislative session, the Massachusetts legislature completely dropped the ball on issues of criminal justice and race. There’s no way to soft-pedal it.
Despite consensus among the top leaders in state government that our humanity, integrity and economy demand smart justice reforms, and despite a sense of great hope at the outset that this legislative session could mark historic progress, reformers came away virtually empty-handed. Yes, much has been on hold while the Council on State Governments crunches data and prepares recommendations about recidivism and reentry. But other major avenues for change, from bail reform and repeal of harmful mandatory minimum sentences to drug diversion and placement of dying prisoners in nursing care, have been similarly shelved until an uncertain future time.

Still, there were accomplishments worth noting, and the ACLU is pleased to have played a role in them. These include: ensuring that innocent women struggling with addiction are not locked up without treatment; restoring drivers licenses for many people rebuilding their lives after a conviction; and securing state grant funding for police body camera pilot programs. But these advances are far too modest when the need for change is so great. 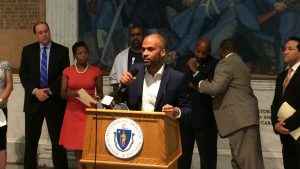 Staff attorney Carl Williams at a speak-out on racial justice at the State House, organized by the Massachusetts Black and Latino Legislative Caucus.

Equally important, at a time when the #BlackLivesMatter movement has turned up the volume for civil rights in response to a national crisis regarding racial bias in policing, the Massachusetts legislature has been thunderously silent. The ACLU of Massachusetts was proud to join a speak-out for racial justice at the State House on the Saturday before the close of formal sessions. We will be even prouder when we can point to real, meaningful reforms that address these issues. What’s on our list? Peace Officer Standards and Training (POST) to ensure basic accountability; data collection and reporting about police-civilian encounters; and independent and impartial investigation of officer-involved deaths.

The legislature has a long way to go on matters of digital security, too. Our laws are simply not keeping pace with our increasingly sophisticated technology. The ACLU has championed a straightforward agenda of re-establishing probable cause warrants as the constitutional gold standard for government information-gathering in the 21st century – for drones and phones and everything in between – as well as preventing employers from snooping in our private social media accounts, keeping healthcare confidential, and developing basic security protections for biometric data. A number of proposals advanced and some even passed one chamber, but none crossed the finish line. Massachusetts needs to step up its commitment to 21st century digital security!

Our landmark wins for public records reform, trans rights, and equal pay made this a historic, banner legislative session for civil liberties and civil rights. Though much remains to be done, this is a moment to savor and celebrate.

At the ACLU of Massachusetts, we know that freedom doesn’t protect itself. So, in the days after the end of formal sessions, we cheer our victories and rededicate ourselves to fighting for the future. See you in January 2017!

Gavi Wolfe is legislative counsel at the ACLU of Massachusetts.

ICE Admits to Practice of Deleting Texts of Senior Officials