By Whitney A. Taylor, Political Director

This election cycle has been plagued by misinformation, untruths and the distortion of data—and I am not talking about the presidential race. The opponents of Question 4—an initiative on the Massachusetts ballot to legalize, regulate, tax and control marijuana for people over 21—have reached new heights in the misuse and cherry-picking of data, and the continued scare tactics of the failed war on drugs.

Question 4 is a sound policy measure that is based on increasing public safety, public health, and social justice. By bringing marijuana into a legal, heavily regulated and controlled market, Massachusetts will be able to enforce age limits, ensure product safety, control all marketing and processing and help decrease the racial bias in marijuana policing—none of which happens within the current illegal market.

The ACLU of Massachusetts believes that voters deserve the truth when they go to the polls, and it is our mission to make sure that public information and data are readily available to the general public. This mission is crucial to combat the Reefer Madness scaremongering being pedaled by the opponents of Question 4.

One of the major talking points of the opposition to Question 4 is that no-one is facing arrest or criminal charges for marijuana possession in Massachusetts.

This is a lie.

According to FBI Unified Crime Reporting data, hundreds of people are arrested for marijuana in Massachusetts every year and then face the barriers to school, employment and housing that come with that arrest. And worse, a Black person is 3.3 times more likely to be arrested than a white person, even though Black people and white people use marijuana at the same rate. Black people are only 8% of the population in Massachusetts, but they account for 24% of the marijuana possession arrests. You can see for yourself in our report: The War on Marijuana in Black and White: A Massachusetts Update.

This is straight forward—people are arrested for marijuana, and there is racial bias in marijuana policing.

Now, in response to these facts, opponents of Question 4 are saying they don't trust FBI data. Really?!?

But the truth will win out. Since opponents don't believe the FBI data—the data set used by all criminal justice researchers across the country—we took a look at local data.

Using the daily updated data on the City of Boston Open Data Portal from the Boston Police Department and 2014 Boston Census data, ACLU technologist and data expert Paola Villarreal created this Live Map of Marijuana Arrests and Police Encounters in Boston that represents the last 15 months of policing. 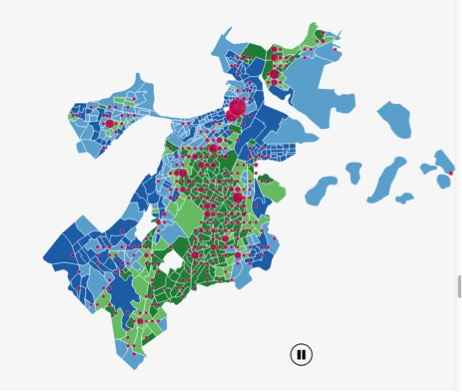 As you can see based on their own data, Boston police stop, frisk and arrest an average of 13 people a week for marijuana, and the vast majority of those police encounters are in communities of color.
Once again the data is straight forward—people are arrested for marijuana and there is racial bias in policing.
At the end of the day, no political spin or voter pandering can change the facts:

If you are one of the million or more Massachusetts adults who use marijuana, or someone who knows that regulation and control are better than a criminal market, or someone who is just tired of government officials who are willing to misuse facts, then you should support Question 4.

Please get to the polls—you can vote early now in Massachusetts if you want—and VOTE YES ON QUESTION 4.