Last night, the Lawrence City Council approved by a vote of 7 to 2 the Lawrence Trust ordinance, which confirms the city police’s commitment not to treat people differently because of their immigration status, and limits police collaboration with federal immigration authorities.

Community members packed the council chambers last night, many having to be moved to an overflow area outside the chamber to watch the proceedings on a television screen. The support was overwhelming, with testimony in favor from immigrants, clergy and other faith leaders, union members and supportive Lawrence residents. Members of the Merrimack Valley Project, ACT Lawrence and Centro Presente, who have led organizing efforts around the ordinance, also spoke. 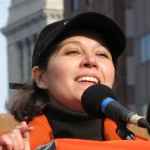 The ordinance codifies existing Lawrence Police practice, which is not to collaborate with federal immigration authorities without a valid court order.

Once the public comment period was closed, the council members in favor of the ordinance spoke one by one about their reasons for the yes vote. Councilwoman Eileen Bernal talked about “human dignity” and, while stating her respect for opposing viewpoints, said that she had to vote her conscience.

Lawrence Mayor Daniel Rivera has voiced his opposition to the ordinance, but with seven votes in favor, the Council is likely to override any possible veto.

If approved, Lawrence would become the fifth city in Massachusetts to pass Trust policies, after Somerville, Cambridge, Boston and Northampton.

Laura Rótolo is staff counsel and community advocate at the ACLU of Massachusetts.