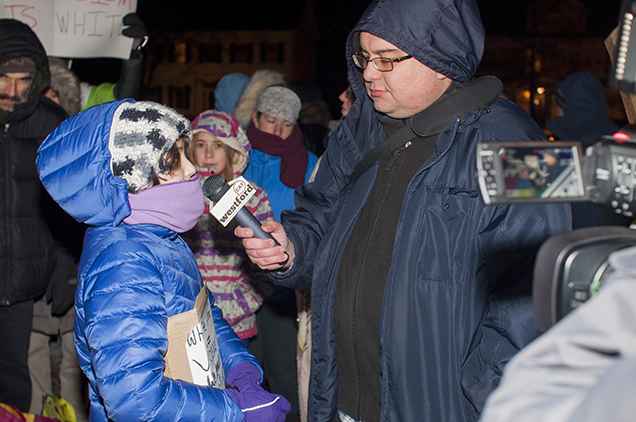 Eleven-year-old activist Margaleet 'Leetka' Katzenblickstein of Westford explains why she organized a rally protesting the killings of Eric Garner, Michael Brown and other people of color at the hands of police.

Free speech should be just that—free from government interference and free of charge. So when the Westford Police asked the Board of Selectmen to require 11-year-old Margaleet "Leetka" Katzenblickstein to pay for a two-person police detail in order to receive a permit to hold a rally against police-involved shootings of people of color, we stepped in to help.

"Imposing financial conditions on a Black Lives Matter demonstration by requiring peaceful protestors to pay money in order to exercise their First Amendment rights to free speech and peaceful assembly offends our Constitution," our deputy legal director Sarah Wunsch wrote in a December letter to the Westford Board of Selectmen. Our legal intern Sara Kominers also addressed the Board directly and helped get the financial requirement rejected.

Westford made the right decision and dropped the fee. And on January 5, Leetka, joined by dozens of supporters, demonstrated for racial justice at the Westford town common. Leetka's mother Nina Katz took to Facebook to thank the ACLU for "speaking to various Westford officials about our right to be heard and their responsibility to defend and protect that right as needed if others tried to intervene." We say: Thanks to Leetka, and others like her, who take such a strong stand for these rights.