In February 2017, I joined the ACLU of Massachusetts as the volunteer coordinator, to integrate a growing volunteer base into the ACLU’s work. In the wake of the 2016 presidential election, I knew that more people than ever before would be asking us, “What can I do to protect our freedoms under the ever-growing threats of the Trump administration?” What I didn’t know, was how quickly and to what extent our volunteer base would grow.

Rewind to the days leading up to the election. In November 2016, the ACLU of Massachusetts volunteer program had 100 members. In the following months, that volunteer base exploded to what is now close to 1,500.

The energy and commitment of our volunteers over the last year helped build the ACLU of Massachusetts’ capacity to work on new campaigns and projects, and face new challenges head on. Volunteers helped push the ACLU’s policy and legislative work forward, changing the lives of people affected by those policies.

In early 2017, we launched the Freedom Agenda, our plan for resisting the threats of the Trump administration through state and local legislation.

Hundreds of volunteers have made phone calls, sent emails, lobbied their legislators, collected postcards, and protested in the streets to support this initiative.

In June, state legislators held a hearing on the Safe Communities Act, legislation that would ensure our local resources are being used to keep our communities safe instead of fueling the Trump deportation machine. Supporters packed the hearing room, outnumbering the opposition and sending a clear message that Massachusetts residents value their neighbors and loved ones, regardless of immigration status. Through the hearings, almost 100 volunteers visited their legislators’ offices to ask them to support the bill.

Volunteers also hit the streets in support of immigrants’ rights. Whether it was rally to pass the Safe Communities Act or a protest demanding that migrant workers picked up by ICE be returned to their families, volunteers showed up, energized and ready to fight for the rights of all Bay Staters. 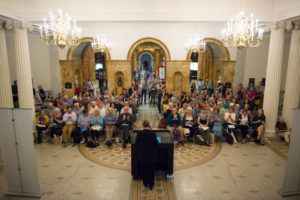 We were back at the State House in September for the ACLU of Massachusetts’ first ever Lobby Day. From phone banking, to preparing materials, to showing up at their legislators’ offices, Lobby Day was made possible by volunteers from across the Commonwealth. 200 people met with their legislators and advocated for the Freedom Agenda. And when voters make their voices heard, legislators listen.

As our volunteers know, advocating takes persistence. Lobby Day wasn’t the first time and won’t be the last time we all need to come together and raise our voices.

Through the fall, ahead of both the House and Senate votes on the most important criminal justice reform legislation in many years, volunteers jumped on the phones to call their legislators and encourage fellow constituents to do the same. While the bill contained many positive reforms, it also included dangerous wiretap amendments that would have drastically expanded the government’s ability to spy on residents’ phone and digital communication. In a huge upset, we defeated the wiretap amendments in both chambers. We also successfully advocated in favor of amendments that repeal some mandatory minimum sentences for drug offenses. Now, a small group of legislators will debate the bill in a “conference committee” to draft a final version. We’ll be counting on ACLU volunteers once again to hold their legislators accountable to passing legislation that reflects our values and makes Massachusetts a more fair and just state.

On the local level, volunteers defended immigrant rights in Salem. A small but vocal opposition put a question on the ballot, trying to overturn the ordinance and leave their immigrant neighbors vulnerable. ACLU volunteers joined the Yes on 1 campaign to uphold the ordinance by making phone calls and knocking on doors to make sure voters knew what was at stake on Election Day. In the end, Salem voters overwhelmingly chose to keep Salem a welcoming city.

Time and time again, ACLU volunteers answer the call to action - so many times that I can’t do justice here to all that they do.

Much of what our volunteers do is behind the scenes, and as volunteer coordinator, I get to see the hard work they put in from start to finish. I am so proud of what we’ve accomplished this year, and proud to be a part of building this incredible community of activists. If you aren’t yet involved in our program, I encourage you to sign up today.

Freedom can’t defend itself. That’s why it’s going to take all of us to ensure that Massachusetts protects the freedoms of all of its residents.

Olivia Santoro is the volunteer coordinator at the ACLU of Massachusetts.
Related Issues