So this is what it feels like to be terrorized

Some recent attacks felt terrible, in a second-hand way, because they could have happened to any of us. We all had a childhood, so we can all imagine ourselves among the children of Sandy Hook. We've all gone to the movies, so any of us could have lost our lives in a theater shooting like the one in Aurora, Colorado. In Boston, we have all passed through those blocks on Boylston Street, and can imagine being at the wrong place at the wrong time when the Tsarnaev brothers walked away.

But the Orlando attack stands among those that couldn't have happened to any of us. This killer chose a place that people went to specifically because not everyone else did—a bar for LGBTQ people, their friends, and at least one of their mothers, on a Latin night. He didn't pick people completely at random. Speaking as a gay person, he picked people like us.

I have to leave it to others to describe the even greater violation that people of color and especially Latinx people feel from this attack. But for me, the Orlando attack revives fears I thought I'd left behind in adolescence. Carefully honed instincts for avoiding unwanted attention from bullies don't stand much chance against an AR-15, and it all feels sickeningly close for comfort.

I can so, so easily imagine being there at the Pulse Nightclub, because I've been to so many like it. I can imagine most of my best friends there. Among many happy nights, I remember things like how we've joked in crowded dives about the is-this-really-up-to-code condition of the bathrooms. Now I think about the people who died in one. 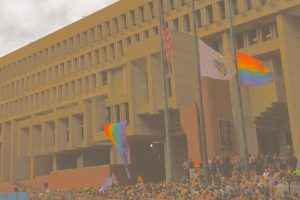 Adding insult to injury, I've been thinking about how I love dancing, probably as a way of making up lost time for not doing much of it while growing up—not as a boy, certainly not with other boys, not in a time and a place that made this kind of freedom unthinkable. It makes me feel really happy to be alive, and happy to have made it through something difficult.

The Orlando killer attacked that, and it makes me realize a number of things.

First, I understand that queer people are hardly the only ones who have been targeted like this. I get it now, more personally, why attacks like the ones on the Emanuel African Methodist Episcopal Church in Charleston, S.C.—a sanctuary like other places of worship, but also one of historic importance—or the attack on Planned Parenthood in Colorado Springs were so terrible, and so dangerous. One of the well-worn phrases we've heard again after Orlando involves "standing with" those affected—and doing more with this greater understanding of these attacks is what that means to me.

Unfortunately, those attacks in Charleston and Colorado Springs provide just two examples, and just from the last year. But I understand a little better now how these attacks can prevent people from exercising basic rights, how they can prevent people from living openly, and how important it is to fight that. Easy access to powerful guns threatens the exercise of every other freedom.
Second, with the notable exception of former Massachusetts Congressman Barney Frank, I feel really honestly proud of the way that so many LGBTQ people have resisted the temptation to blame Islam. We know that the vast majority of the animosity we've experienced has come from other corners. We know hypocrisy when we see it, in the form of "thoughts and prayers" for the victims, coming from politicians who have done everything they could to push hundreds of anti-LGBTQ and anti-immigrant measures. And after all the ridiculous predictions of how the sky would fall and civilization would literally end if we won equal marriage rights, I think many of us can spot the demonization of others, and I think we have a role to play in stopping it.

Third, I understand that even greater surveillance, which both leading presidential candidates quickly embraced, won't keep us safer. Surveillance didn't catch the Tsarnaevs, it didn't stop the San Bernardino attack, it didn't spare Charleston, it didn't prevent Orlando. We have no easy way to intercept these attackers. Stopping them amounts to looking for a needle in a haystack—so we should at least stop adding more hay, so that law enforcement officials can devote more time and resources to their best leads.

And finally, I'm still going out dancing, even if it kills me.

Chris Ott was the communications director for the ACLU of Massachusetts. Sign the ACLU's Stand Up Against Hate pledge here.