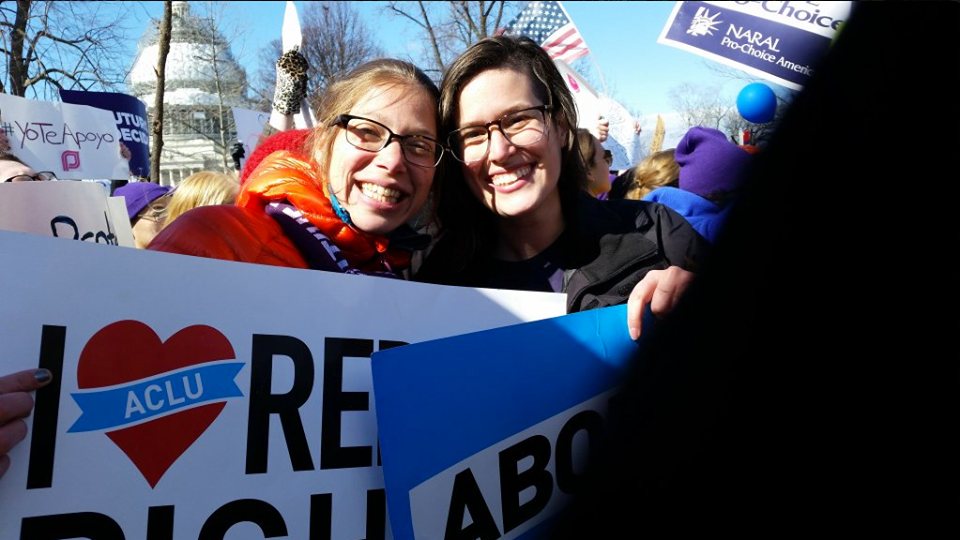 Above: Staff attorney Jessie Rossman (left) and legal fellow Hallie Pope rally for reproductive rights at the Supreme Court during the March 2, 2016 hearing in the landmark reproductive rights case, Whole Woman's Health v. Hellerstedt.
The U.S. Supreme Court is now considering one of the most important reproductive rights cases in decades: Whole Woman’s Health v. Hellerstedt. The case challenges a Texas law that subjects abortion clinics to needless, expensive restrictions that many clinics cannot afford. If the Court upholds the law, Texas and other states with similar laws could force many of their clinics to close, making it nearly impossible for many women to get a safe, legal abortion.

As an attorney, I believe the judiciary can help promote and protect social change. As someone who cares about reproductive freedom, I believe in the abortion rights advocates’ legal arguments—and I hope and believe the Court will do the right thing when it issues its ruling later this year.

But I also believe in the power of our voices—individually and collectively—in the streets.

That is why I got up at 5 a.m. on Wednesday to stand on the sidewalk outside of the Court and sing and chant alongside thousands of our allies. Journalists reported that they could hear us inside the courtroom—a rare, and incredible, occurrence. That is important.

Yet just as important is what we heard amongst ourselves outside.

I heard women who had protested pre-Roe who couldn’t believe they had to do the same thing forty years later, and students who had skipped midterm exams to join them. I heard a pro-choice Reverend open the rally with an invocation, and a Rabbi proclaim that politicians interfere with our religious freedom when they take away our right to choose. I heard vociferous "trust black women" chants and Spanish speeches translated from the podium. I heard us proclaim that trans rights are a reproductive justice issue. I heard that "the sin is not abortion, but forced parenthood, poverty, racism, homophobia and transphobia."

In short, I heard us raise our multitude of voices to demand equal access to abortion care for all.

At one point, I saw Speaker of the House Paul Ryan step out to join the anti-choice crowd. I deliberately say "saw," because I could not hear him. Not one word. Our voices drowned him out.
And this is why I am hopeful. I do think we will win in the Court. We have the better legal arguments. No matter what, however, we are already winning. We have heard our own voices. We have felt our own power. And one way or the other, we are going to use that collective strength to ensure that our legal right to abortion care is accessible to all.

I don't have much of a voice today. I lost it after five hours of "stand up, fight back" call and responses. But the process of losing my voice to the chorus and hearing how strong we are together is what gives me hope that we will win.

Jessie Rossman is a staff attorney at the ACLU of Massachusetts.

Beyond Roe Coalition applauds MA Senate investments to protect and...