A study published today in the Journal of Internet Medical Research finds that analyzing GPS and communications records from your smartphone can predict with near 90% accuracy whether or not you're depressed.

"People who suffer from depression tend to frequent fewer locations than people who don't, and from a social standpoint, they tend to be more withdrawn. So, the researchers analyzed the data of 28 participants to see if there was a relationship between high levels of phone usage — a proxy for being withdrawn — or GPS data, and depression. (Because of certain technical and adherence issues, 12 participants couldn't be included in the study.)

"Some variables gathered by the phones were strongly related to participants' depression scores, the researchers found. For instance, "the more depressed people were, the more irregular their movements were," meaning that they didn't leave the house or return home at regular times, explains Sohrob Saeb, a computer scientist at Northwestern University and a co-author of the study. The researchers also found that people who were more depressed used their phones more, as expected."

We know that the NSA and CIA use metadata—including phone records and GPS data—to target people for assassination. We know that local police and the FBI use metadata to track and identify associations and identities online. We know that even one piece of metadata can reveal sensitive private information, such as whether you're a cancer patient, feel suicidal, or are having an abortion. Now we know that anyone with access to your smartphone's GPS data and call records may be able to tell if you're feeling depressed, and chart your mental health going back years.

Under federal law, police are not required to obtain warrants before tracking your cell phone's historical location, or obtaining records of who you communicate with, how often, or when. The law is stuck in the 1980s but our technology has blasted into the sci-fi realm. Predictably, this gulf between privacy law and existing communications systems is being filled with loads of warrantless spying.

Transparency reports from companies like Google and Verizon show that the majority of government demands for user information come in the form of subpoenas—many if not most of which are never even seen, let alone authorized, by a judge. In Massachusetts, like in many states, local prosecutors can obtain our call records (and banking records and much more) with administrative subpoenas that are to prosecutors what prescription pads are to doctors. No one outside the prosecutor's office sees them or approves them. 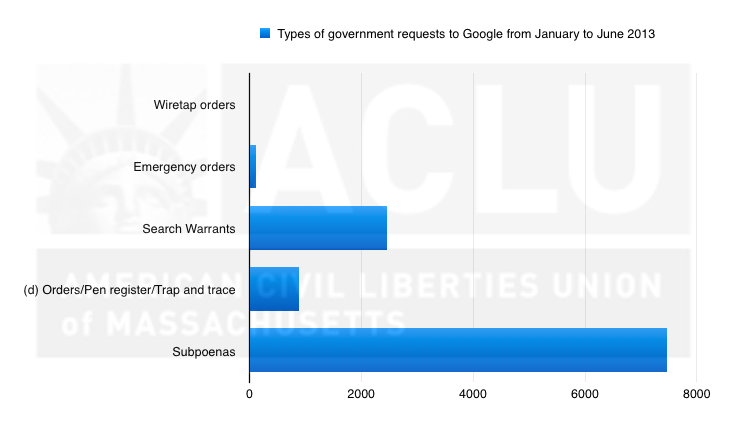 As others have said and written, metadata is data, and extremely revealing. You don't need to listen to someone's phone calls or read their emails in order to have a very clear window into their life; collecting and analyzing all of their metadata will do the trick. The obsolete legal regime that says the government can obtain these records without the Fourth Amendment's probable cause warrant protection never quite made sense. But in the Information Age it is a disaster of proportions we are only beginning to understand.

Live in Massachusetts? Take action! Tell your legislators to support the Electronic Privacy Act, which will require police get a warrant before tracking you online.
Originally posted on Privacy SOS, the ACLU of Massachusetts blog about privacy.

Massachusetts State Court Requires Police to Get a Warrant Before...