Update: On February 26, the ACLU of Massachusetts and other civil rights groups filed a complaint that asked US Attorney Carmen M. Ortiz's office to investigate accusations of racial discrimination at Boston Latin.

It is a bit unclear who this student is and where the school is, but in a real sense she is in every city and town, in every classroom. Scenes similar to this one are happening all over the country. 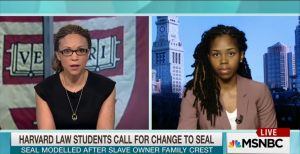 Here in Massachusetts, high school, university, graduate and law students have been turning up the struggle against racism and white supremacy. Several groups at Harvard Law School, including Royall Must Fall, the Black Law Students Association, and Students for Inclusion have been fighting institutional racism and symbols of slavery. Harvard Law student Derecka Purnell recently spoke to Melissa Harris Perry about some of these issues. These students are asking essential questions about what a law school education is, who it is for, and how race is playing a role.

On the other side of the Charles River, students at Boston College have been challenging systemic racism on their campus. Their campaign, Eradicate #BostonCollegeRacism, started with an infographic to expose these issues to the community. Ironically, the response to the infographic highlighted the very issues of racism it was addressing. This encouraged the students to get more organized and to double down on the fight against the institutional culture at Boston College.

At the same time, students at Brandeis took it to a different level. They occupied an administration building. Then they released a list of thirteen demands addressing specific incidents of racism and structural changes to address such issues. The movement at Brandeis, hashtagged FordHall2015, is a h/t to the January 1969 Black student occupation of the same building for nearly precisely the same, unresolved issues.

And like the tenacious high schooler who explained racism and white supremacy to her class, young women here in Boston are bringing it to their school. At Boston Latin School students from the group #BlackatBLS have brought their campaign to social and traditional media, Boston City Hall, and the halls of the high school itself. Their YouTube video, embedded below, has garnered tens of thousands of hits. They have compiled evidence of racism by students and teachers. They are putting pressure on the school administration, the city’s school committee, and the mayor.

This work has inspired students at Boston Latin Academy to speak up about a similar environment in their school in Roxbury and launch a similar hashtag (#BlackatBLA).

The atmosphere in educational institutions is changing to one that demands an environment that is not merely “tolerant,” but explicitly anti-racist, one that is not only diverse and inclusive, but also actively engages the student body and calls out oppressive behaviors.

This Black History Month we should remember that Black history is not just limited to things that happened between the 1954 Brown v. Board Supreme Court decision and the 1968 assassination of Dr. Martin Luther King.

Black history is last month in Boston, last week in Flint, and tomorrow in your city.

And you are going to make it happen.

We are going to make it happen.