As if in keeping with the holiday spirit, a federal court on Wednesday night affirmed a legal ruling in an ACLU case that has allowed more than 100 Massachusetts immigration detainees to obtain their freedom. The judgment lets many immigrants with pending immigration cases remain with their families. 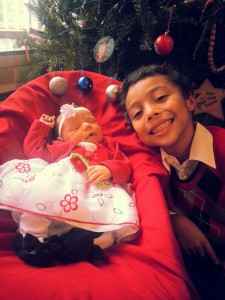 ACLU client Clayton Gordon today sent us this photo of his son and daughter.

You can read more about the issue of immigration detention and our case, Gordon v. Johnson—but first read what ACLU client Clayton Gordon (shown above in photo by Paul Shoul) told us today that this means for him and his family:

"As we sit back and reflect at Christmas time, we are so blessed to be able to spend this special time together as a family with our new daughter, which couldn't have been possible without the ACLU. There are so many families divided at this time, and our hearts truly go out to them and the pain they are going through."

Clayton is right. Tens of thousands of immigration detainees who are not accused of any crime will spend their holidays in detention while the government attempts to deport them.
Earlier this year, our staff attorney Adriana Lafaille wrote this account of her visit to the largest immigrant detention center in the United States. And yesterday, the mothers and children detained there released a gallery of letters asking the President not to make them spend Christmas behind bars.

This makes yesterday's win for Mr. Gordon all the more meaningful.

"The First Circuit's judgment reflects thoughtful legal analysis and comes at a welcome time," said Lafaille. "It is wonderful to know that the Gordons and more than a hundred other New England families who have been reunited after the district court's ruling in this case are spending the holidays together and can remain together as they continue to fight their immigration cases."