March 2: ACLU fights for reproductive rights at the Supreme Court 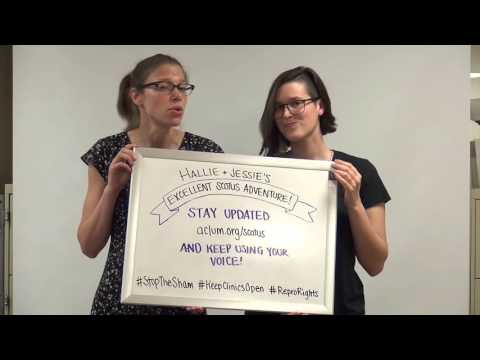 View our highlights from the rally at the Supreme Court! ACLU of Massachusetts staff attorney Jessie Rossman (above left) and legal fellow Hallie Pope (above right) covered the landmark reproductive rights case before the U.S Supreme Court on March 2.

This important case—Whole Woman’s Health v. Hellerstedt, in which the ACLU has filed a brief—has high stakes. The Court reviews a Texas law that subjects abortion clinics to needless restrictions, which many can't afford to comply with. If the Court upholds the law, Texas and other states with similar laws could force many of their clinics to close, making it nearly impossible for many women to get a safe, legal abortion.

Jessie and Hallie rallied outside the Court with our allies, to make voices for reproductive freedom heard. Read Jessie's blog about her experience: The power of hearing our own voices.

SUPPORT OUR FIGHT FOR REPRODUCTIVE RIGHTS!

Whole Woman's Health isn't the first time the ACLU has taken the fight for reproductive rights to the nation's highest court.

The ACLU filed an amicus brief in this case in which the Supreme Court struck down a state prohibition against the prescription, sale, or use of contraceptives, even for married couples. The Court held that the Constitution guarantees a "right to privacy" when individuals make decisions about intimate, personal matters such as childbearing. Watch the video.

The ACLU's general counsel, Norman Dorsen, was a member of the team of lawyers representing the plaintiffs in this case, which challenged a Texas law prohibiting all but lifesaving abortions. The Supreme Court invalidated the law on the grounds that the constitutional right to privacy encompasses an individual's decision whether or not to terminate their pregnancy. Characterizing this right as "fundamental" to a person's "life and future," the Court held that the state could not interfere with the abortion decision unless it had a compelling reason for regulation. A compelling interest in protecting the potential life of the fetus could be asserted only once it became "viable" (usually at the beginning of the last trimester of pregnancy), and even then an individual had to have access to an abortion if it were necessary to preserve their life or health. Watch the video.

If Roe v. Wade should ever fall, Massachusetts can rely on Moe, an ACLU of Massachusetts case that ensures the right to reproductive freedom under our state constitution. Recognizing that the Massachusetts Declaration of Rights provides stronger protection for the right to an abortion than the federal Constitution does, the Massachusetts Supreme Judicial Court affirmed the ACLU's position that state Medicaid must cover abortion care in the same way it covers pregnancy care—a ruling especially important to those who might have trouble affording such care on their own. Watch the video.

Argued by the ACLU, this case challenged a set of onerous restrictions on abortion enacted in Pennsylvania. The ACLU fought to prevent the Supreme Court from overruling the core holdings of Roe. In this case, the Court preserved constitutional protection for the right to choose. But it adopted a new and weaker test for evaluating restrictive abortion laws. Under the "undue burden test," state regulations can survive constitutional review so long as they do not place a "substantial obstacle in the path of a [person] seeking an abortion of a nonviable fetus." Watch the video.

Beyond Roe Coalition applauds MA Senate investments to protect and...