A July 2015 report confirmed what community members and the ACLU of Massachusetts have known for a long time:

The Boston Police Department has engaged in racially discriminatory stop-and-frisk practices that have disproportionately targeted Black and Latino communities.

The report, authored by researchers from Columbia, Rutgers and the University of Massachusetts, analyzed 200,000+ encounters between BPD officers and civilians from 2007–2010. It found racial disparities in the BPD’s stops-and-frisks that could not be explained by crime or other non-race factors. Blacks during that period were the subjects of 63.3% of police-civilian encounters, although less than a quarter of the city’s population is Black.

The study confirms the conclusions of the ACLU’s October 2014 Black, Brown and Targeted report, which first highlighted the disparity revealed by the researchers.

The BPD claims progress since the 2007-2010 study period. But without data, the public has little way to verify that progress.

In July 2014, the BPD reportedly pledged annual disclosures of stop-and-frisk data. We will work to hold the BPD to this pledge. The public is entitled to know, as promptly as possible, whether people of color in Boston are still being subjected to disparate treatment by the BPD. 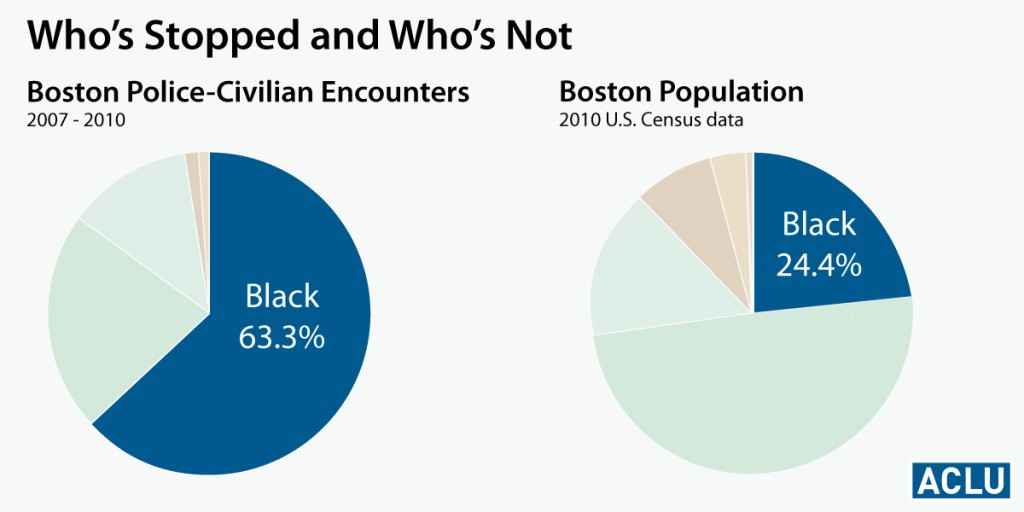 Better training - The ACLU report urged the BPD to implement better training, including training on bias-free policing. In July 2015, the BPD announced that it intends to do precisely that.

Better data - The ACLU report urged the BPD to regularly report data about its street encounters with civilians. After all, the BPD just released the final report on encounters from 2007 to 2010, which means the public had to wait five years to learn that the BPD had been engaging in what researches called "disparate treatment" and "racial discrimination." In July 2015, the BPD reportedly pledged to disclose data annually going forward. Despite this pledge, and despite a September 2014 public records request in which the ACLU requested street-encounter data since 2010, the BPD has not disclosed any post-2010 street-encounter data. As a result, on August 6, 2015, we filed a public-records lawsuit to hold the BPD to its transparency pledge and to ensure that communities of color will not once again be forced to wait years before receiving evidence about whether they've been subjected to racial discrimination.

Body cameras and police-civilian receipts - The ACLU report urged the BPD to implement body-worn cameras and police-civilian receipts in order to improve accountability and oversight of police officers. Many police departments throughout the country have implemented body cameras and seen reductions in the use of force and in complaints against police officers. The BPD did not initially agree to implement a body-camera program; instead, it repeatedly arranged to videotape peaceful protesters (see photos below).
In September 2015, however, Boston Police Commissioner William Evans announced that Boston police will pilot the use of body cameras. Civil rights groups including the ACLU of Massachusetts, the Boston Police Camera Action Team (BPCAT), and the NAACP Boston Branch applaud the decision and have released a model body-worn-camera policy designed to ensure privacy and effectiveness.

Watch Stop and Frisk Boston - Ivan's Story to hear from activist Ivan Richiez, who estimates he's been subjected to stops and frisks, “Many times...30 to 40 times. Maybe 50."

Know your rights during police encounters

Learn what you can do during police-pedestrian encounters and when the police or FBI contact you for questioning.
Access other Know Your Rights resources, or seek legal assistance from the ACLU of Massachusetts.

Read media coverage of our report